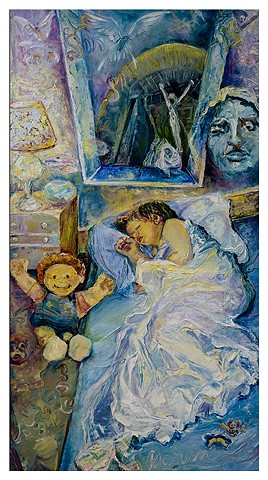 When my oldest child, Rebekah, was a teenager she told me that she used to fear that the sky would fall through her skylight. That insight stirred my imagination. I saw the skylight as a portal to the floating unconscious. There's Nicodemas pointing his finger toward the sleeping child and a Madonna's pained face expresses the wound of the celestial mother, fearful for the safety of her child. The cabbage patch kid is a bit diabolical as other, Goyaist figures reside in the wall paper.

Maj Ragain wrote a response poem to this painting,A Dreamer Sails Into the Land of Nod

Sleep is a small death, the child Rebekah a fish suspended in a deep, shadowed pool. A window opens near her head. Beyond that a crucifixion, a ghostly Christ nailed for flight, drawn crossbow, ribbed arrow, the long arc home splitting the way to the tomb.

Toys anchor against the child’s dreaming herself out of the world, ragged stuffed totems, dumpling dolls, stitched smiles, monkeyshines in darkness.

A face thrusts its way through the curtain, the silver masked guardian, the sleepless mother who broods over the down child, a broom stick witch cackles her dirty magic off the edge and gone.

What we see is the outer boundary of the unformed, the nameless. The center itself is empty, no place to peg a climber’s tent or hang a dreamer’s skull cap.

Every hungry ghost looks back to this starving kingdom. Jesus’ eyes are downcast at the earth he does not wish to abandon. The last dove of redemption beats its wings against the glass.

The unseen presses against the skin of this world.

In dream the floor is lifted into the heavens. Shoes float the Milky Way. The nails of crucifixion are bent into hooks to fish the starry sea.