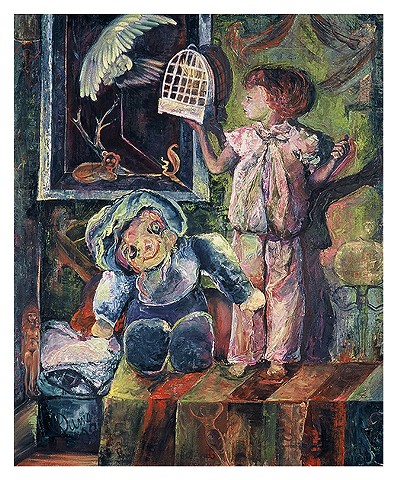 Between, also known as Bedtime for Raggedy Ann, Isis & Others When I was a child I sometimes saw images from slight variations of paint or patterns, which were barely discernible to other people. From this memory I created an imaginary dream world for this girl holding a bird cage. The girl's bedroom wall is alive with creatures from dynastic and pre-dynastic Egyptian iconography. For some children with night fears, sleep is a small death.

Maj Ragain wrote The Blue Eye Blinks Once Every Hundred Years in response to my painting.

The wings descend, ripe to root themselves in the pajamaed child’s shoulders. She will not sleep tonight in her small, crowded bedroom, the window open to deep midnight. She will be gone by daybreak. What breaks day we cannot name. This she has dreamed into being, her menagerie. A plump, plushed Raggedy Ann clings to her knee, mute, fixed, a thing of play. A watchful Isis stands in the corner of the temple toy room, naked icon, fertile throb, the chalked emblem of her sister to the right, her arms spread in worship, in ascension. The golden snake of the Nile slithers past the lion cub guardian, along the window ledge. His venom is white light, Ra’s numbing bolt. The snowy hawk, Isis’ ghost tattoo, hovers before the ivory cage’s barred room. She calls to the sunflower canary prisoner, to the hostage child, new wings fingering her shoulders, I know the way across the darkness. Follow me to the underworld. Trust and follow.