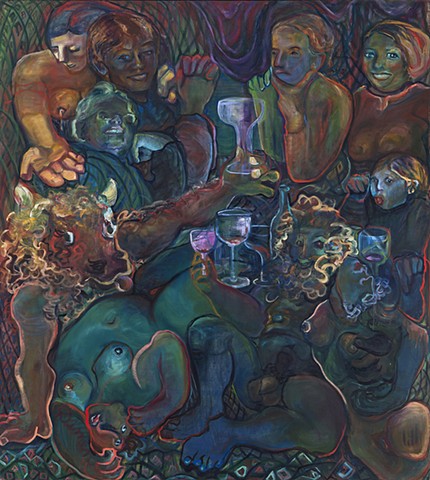 The painting "Strange Guests" comes from my 2009 solo exhibition The Other Story, a retelling of the ancient Greek myth of Ariadne/Theseus and the Minotaur. The exhibition re-envisioned the brave Ariadne who risked all to save Theseus from the raging Minotaur. Strange Guests re-imagines a bacchanal dinner paper print of Picasso's from the early 20th century.

Also invited into this bacchanal are strong women, some Picasso's and some mine. The little girl sticking out her tongue adds even more levity to the scene. The characters cavort with my Minotaur monster which, is more sex crazed than a man eating carnivore.