Adolescence is a perilous period for child and parent alike. I barely got through those years unscathed. So, when my youngest approached twelve, I anticipated her adolescence both with excitement and dread. All cultures address developmental milestones and concomitant psychological ambivalence with narratives such as myths and fairy tales. One of the most popular fairytales known today is Cinderella, a 18th century French version of more ancient tales featuring an innocent pubescent girl, abandoned by her parents and a prized slipper, symbol for the virginal vagina. An ancient Egyptian tale has an eagle steal the small delicate and much valued slipper. But it’s the German Brother Grimes’ version, known as Aschenputtel , which delves most deeply into the heroine’s psychosexual turmoil. Here Cinderella is determined to own her fate. 1. Bettleheim, Bruno. The Uses of Enchantment: The Meaning and Importance of Fairy Tales. Vintage Book, Division of Random House, N.Y. 1977, pp. 236-277 2. ibid This painting is in a private collection 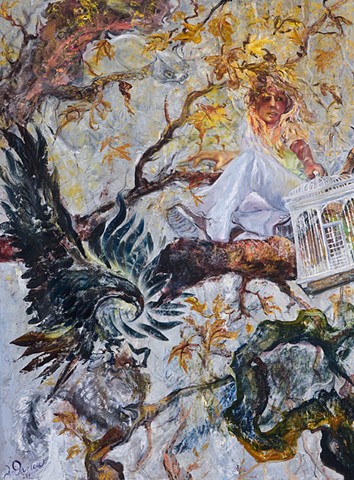