Portfolio > Leda and the Swan: The Original Rape Myth

The Leda and the Swan myth as told by the ancient Greeks is a later patriarchal version of an even more ancient love chase myth. Prior, to the establishment of patriarchal religions, the goddess, known as Lepta or Lento, pursues a god or king until she devours him. A swan takes his body north to a final resting place. Ironically, by the time of the ancient Greeks, the swan changes from the symbol of the goddess’ triumph to her downfall and rape.1 My Leda is a response to male centric depictions of this myth. The theme of Leda’s rape, by Zeus disguised as a swan, has been a favorite artistic subject for thousand of years. Representations in sculpture, painting and drawing have dramatically changed over time, reflecting prevailing patriarchal attitudes and beliefs regarding rape. 1 Graves, Robert, The Greek Myths: Volume I. London, England: Penguin Books, 1960 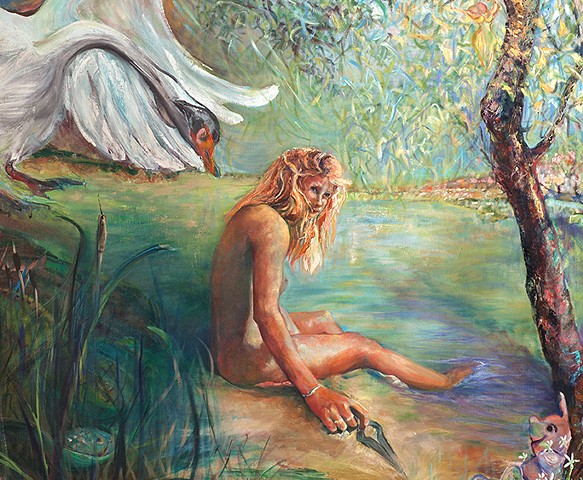